Throughout her year long illness, Julia inspired countless people, those who knew her and many who never had the opportunity to meet her, through her grace and courage. Her bravery and positive outlook despite her odds and her fighting spirit in the face of such pain and loss captured the hearts of all. Julia was determined not to be defined by her disease. She was always more concerned about others than about herself. When she was in the hospital, she would have her mom check on the other children on the unit who did not have a parent with them to be sure they were ok. That was Julia. Always thinking of others. Her story continues to inspire others and her legacy continues through what has become known as the Julia Effect. 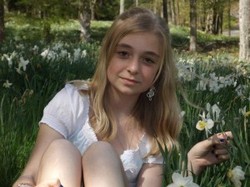 "As most people know, over Christmas 2010 I had a sinus infection and was put on Augmentin to treat it.  A few weeks later, I had symptons of liver-disfunction, including slightly yellow eyes. My mom brought me up to CCMC in Hartford where they discovered my liver enzymes were quite elevated. By mid January of 2011, I had a liver biopsy to find out what was going on with my liver. They determined I had a non A-E hepatitis. Somehow, my immune system got confused and was attacking my liver. To get my liver numbers down, I started taking medicine to control it, and it was working very well. But, a week later my mom picked me up early from school and brought me back up to CCMC because I had black spots in my mouth, and red dots on my legs and arms. Those dots we found out were called patekei, and those dots were related to symptoms of having low platelets. They ran a complete blood count and it showed that I had really low platelets and white blood cells. So, I had to stay overnight and get a transfusion of platelets, which is where they give me platelets through an IV. I had to stay the weekend to prepare me for monday morning’s bone marrow biopsy. Your bone marrow is responsible for making red blood cells, white blood cells and platelets. It went really well, I was just a little sore. It turns out that I had severe aplastic anemia which is bone marrow failure. In very rare cases the immune system will continue to attack the bone marrow after a non A-E hepatitis. We went to Boston Children’s Hospital for a second opinion and pursued treatment there. My parents and sister were not a match for a bone marrow transplant, so I underwent ATG/Cyclosporine treatment at the end of February while we searched for a matched unrelated donor.  We were hoping and waiting for a response, but I had a few infections during the past few months of which I had a serious bacterial infection in my bloodstream at the end of July and we decided to pursue a bone marrow transplant in September.  I was fortunate to have found a perfect 10/10 match and my donor was also a young male which was very lucky.  I had my bone marrow transplant on October 1st."

Julia passed away on January 27, 2012 following complications from her bone marrow transplant. It was determined that she had IPS (idiopathic pneumonia syndrome) and at this time, the medical community doesn’t have many options for treatment. Our hope is that with continued research and funding, one child’s life may be saved and one family will not have to endure the pain and suffering that aplastic anemia brought into our lives.
© Julia's Wings Foundation. The Julia's Wings Foundation is a 501(c)(3) nonprofit organization under federal tax guidelines